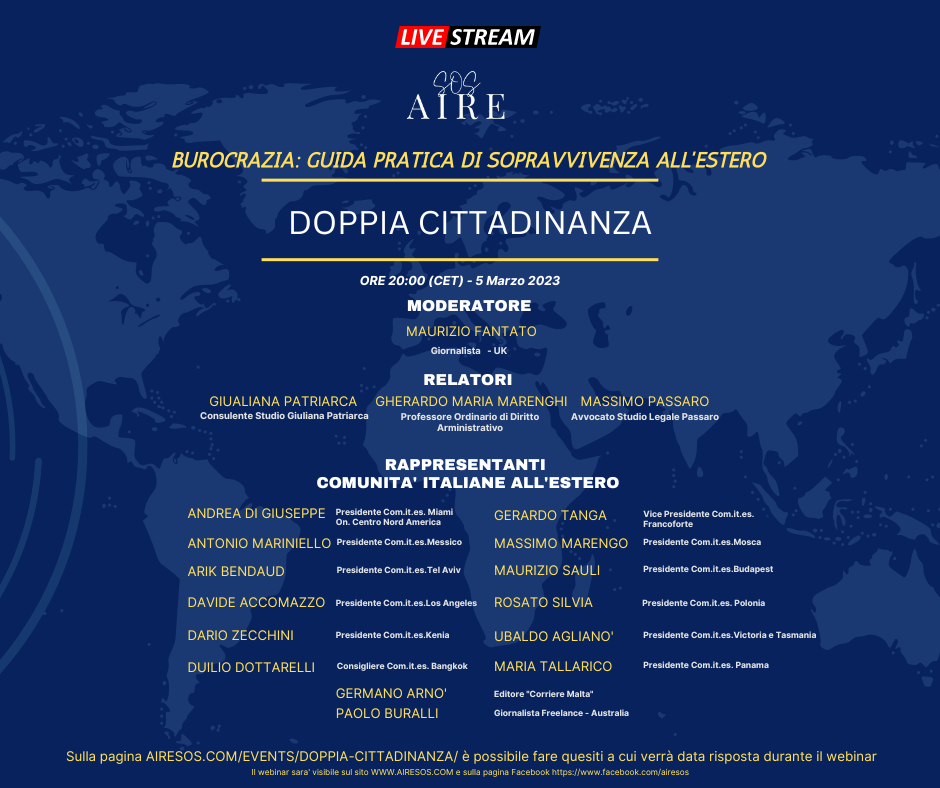 The webinar will provide users with a useful overview of the issues of Fiscal Residence, Double Citizenship for Italian Citizens, International Agreements on Citizenship, the status of stateless citizens, Possibility of Italian immigrants abroad.
Italian law recognizes the possibility of being citizens of several states. That is, the right to have dual or multiple citizenships is recognised. This applies both to Italian citizens who move abroad permanently and also want to obtain citizenship of the country in which they live. It is also for those who come to Italy and decide to live there without giving up being citizens of their country of origin.

Massimo Passaro, born in Avellino, in 1972, after graduating in Surveyor and Law Degree, he continued his education, earning a second Degree in Religious Sciences, Master of Bioethics and Professional Deontology (awarded as best student for the thesis Organ Transplants and Market), Master in Biopolitics and Law, Master in Business Management (Awarded as Best Student for the realization of the Project Work “Realization of a fairground in Salerno), Master in Euro design, Training course “Budget and New Land Registry”, Training course in Administrative Law and simplification of legislation, Seminar “Green Thinking” substantial development of the Green Economy, School of Law and Policy (winner of the Scholarship as the best student), Regional Course of Fashion Designer, Seminar Innovation in Public Administration and new participatory processes, Course and Professional Update for Professional Mediators, Refresher Course in Immigration Law.
In addition to the school, university and personal educational path, he as a journalist publicist, in addition to having collaborated with countless newspapers such as (Opinion Irpinia, Southern Chronicles, South Broadcasting Center, The Shield, Proposal 80 for Irpinia, Southern Chronicles and not least the Corriere di Malta), has elaborated for the DIMT (Market Law and Technology) ISSN: 22397442 the Scientific Publication “Observations between Law and Bioethics on the discipline of transplantation of organs and living cells”. In the years after graduation I worked as a lawyer dealing with many important cases and ranging from Administrative Law, Tax (with a Class Action National), Civil (currently I am the legal representative of the 119 Comites in the world – Comitato Italiani all Estero – and I follow the reform of the CGIE – Consiglio Generale degli Italiani all Estero), (class action for the respect throughout Italy of the ZTL installation), Penal, Insolvency Administrator, Custodian and Sales Delegate in Real Estate Executive Procedures, Anti-Money Laundering Expert (currently advising several foreign Payment Institutions), Professor of Auge (Academy of European Law Studies)Assistant at the University Link of Malta in the field of Ecclesiastical Law.

At the University of Salerno, essayist and member of the Scientific Committee of the State and Participation Institute. Lawyer Administrative Cassationist expert in Urban Planning and Procurement.